It can be exhausting to make flat-pack furniture, especially if you have trouble handling the smaller parts and screws. Keeping and struggling with Allen Keys and using old manual screwdrivers can be frustrating and painful.  Here are the best cordless screwdriver: build your flat-pack furniture faster.

However, one of the best alternatives for those planning to build a lot or build frequently is a cordless electric screwdriver.

This might seem like a luxury to those without consumer power tool experience, but those who plan on using screwdrivers frequently can tell you just how convenient and worthwhile this type of product can be.

If you’ve never purchased one before, or simply need to replace your own with a higher-quality model, there are a few brands and products that are good to know if you plan to make a purchase.

These are just a few of the strongest cordless screwdrivers you can find online, as well as some general things you should know when deciding which one is best for you.

They might seem like challenging power tools when you first see them, but they’re an excellent addition to any DIY crafter’s toolbox that you should definitely consider picking up.

Whether you’re buying your first or just need something new, it’s important to know exactly what a good cordless electric screwdriver looks like. The products listed here are not only great options that should help you with all your DIY needs, but excellent examples of products to compare with when looking for a cordless screwdriver that fits your own personal tool preferences. 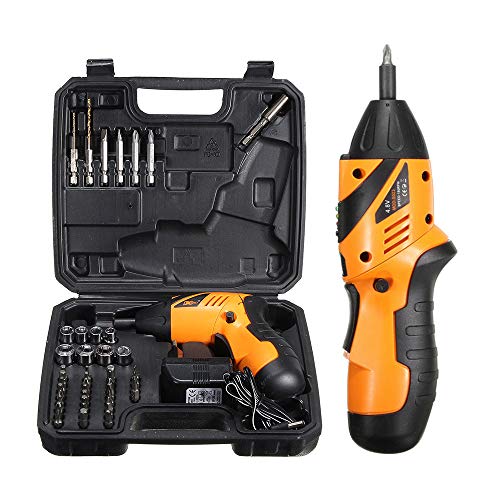 If you want the strongest all-around electric screwdriver, you can do far worse than the ZXMOTO 45-in-1. This is one of the most versatile products out there, as it has an excellent selection of screw tips to ensure it can work with any screw, as well as a twistable rotating head that can change the grip between a straight screwdriver or an easy-to-hold pistol shape.

Its versatility is extended further by a convenient LED light near the head, letting you screw in dark spaces and outside with perfect accuracy and vision without handling multiple tools. With excellent battery power and fast charging speed on top of these unique features, this is undoubtedly the most effective product for those wanting an ideal electric cordless screwdriver. 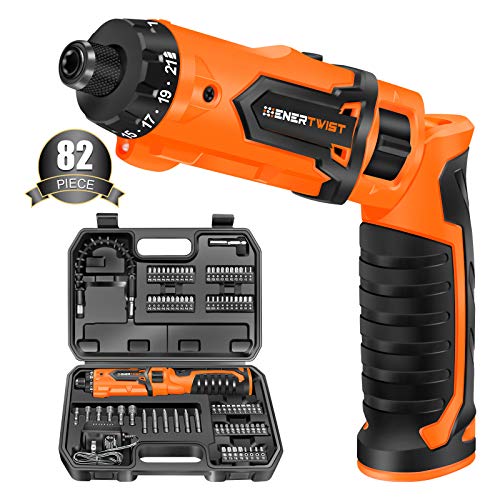 Those in need of a slightly more heavy-duty cordless screwdriver might be more interested in something closer to a traditional power tool, and the Enertwist 8V is just what you’ll want. With nearly double the voltage of the ZXMOTO, this can screw at much greater speeds and last significantly longer during long periods of use, all while managing to remain remarkably lightweight.

It even features a similar shiftable handle to swap it between grip styles, but its slightly increased length makes it more comfortable bent than straight for many forms of use. Thanks to its greater strength, it can also do some light drilling into weaker materials, making it a great all-purpose tool outside of simply fastening or loosening screws. 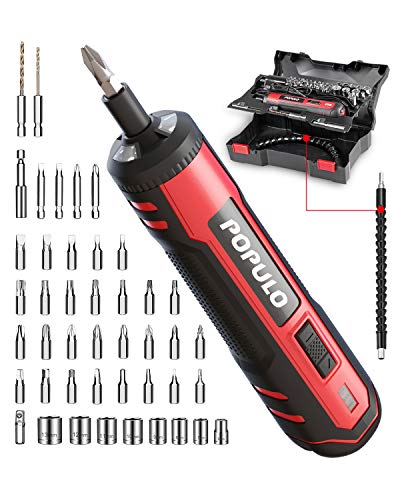 If the heavy-duty options seem slightly too intense for your use, then this model from Populo is very likely something you’ll find more appealing. It has the wide set of heads featured by the other models, but with a much more lightweight and thinner traditional straight handle instead of the thick and shiftable style.

This makes it feel more like a proper alternative to a traditional screwdriver, and far more welcoming to those who haven’t tried using an electric screwdriver before. If you’re especially new and just want something simple for infrequent DIY projects and flat-pack furniture building, this model is hardly a disappointment by any means.

How To Choose A Cordless Screwdriver These products are definitely some of the strongest cordless screwdrivers you can go for, but if you’re especially new to this type of tool, you might not know entirely what the difference is between a good or bad cordless screwdriver. These items are unlike many other types of electric tools, featuring less power than standard power tools while being more complex than manual ones.

If you don’t feel sure enough about the features of these products, these common traits should give you an idea on what makes the best cordless electric screwdrivers so great.

Since the rotation speed on an electric cordless screwdriver doesn’t have to be high, the battery power on these tools is going to be impressive with nearly any model you find. Most cordless screwdrivers come with their own battery charger so that you can reload the lithium battery, but since an electrical screwdriver only runs while it’s actively screwing, you won’t find that it’s necessary to charge it too frequently.

This can still depend on how intensely you’re using it, though, as running it for longer periods of rapid time can cause the battery to degrade much faster. That said, this is unlikely to be the case so long as you’re careful with your screws and don’t need to rapidly unscrew and rescrew your projects and furniture, so as long as you keep the charger or have a spare battery stowed away, you shouldn’t expect your electric screwdriver to fail you in terms of power.

If the products above have shown anything, it’s that an electric screwdriver can come in all kinds of shapes and sizes. Some can look like more traditional manual screwdrivers with a rotating screwdriver bit, but others can be more pistol-shaped to allow a more comfortable grip. If you’re new to using these types of tools, it’s understandable if you think this seems unnecessarily intense.

In reality, this actually doesn’t make a significant difference besides what you think is most comfortable. The pistol grip can be extremely easy to hold without twisting your wrist, while thinner straight handles can get into more narrow spaces and strange angles. It really just comes down to what you feel most comfortable with, as neither type of handle is inherently superior for most DIY projects and furniture construction.

Perhaps the most unique trait that matters for most cordless screwdriver users is the minimum and maximum rotation speed of a given tool, as this can most greatly change whether a tool is good or bad for your use. Most cordless electric screwdrivers only have one speed, usually between 180 and 450 rotations per minute, moving quite slow so as not to cause any safety concerns.

If you think you’ll need more speed, you might want to try the alternative option of a driver drill, which is essentially a drill with customizable speed settings to go between rapid spinning and careful screwing. These products, like the Dewalt 20V MAX Right Angle Cordless Drill & Driver Kit, can be a little more expensive and powerful than you’d need for flat-pack furniture, but it can be much more versatile than your average cordless electric screwdriver if you want to get more use out of your tool.

Alongside cordless screwdrivers, it should be briefly mentioned that you can also get similar options that are corded, allowing you to plug into a wall outlet rather than running off an internal battery. The reason to go with a corded screwdriver is when you’re planning to do a lot of industrial screwing, as it will be much lighter and have more tightening torque thanks to its lack of a heavy battery.

However, it’s hard to say these are convenient for building furniture or doing DIY projects, since they have far more intensity than most individuals will need. They also can be quite restricting due to their cord, getting in your way frequently while building items like flat-pack furniture in a living room instead of a workshop. As a result, corded electric screwdrivers are just not necessary outside of mechanical workshops and industrial assembly areas.

Do You Need A Cordless Screwdriver?

While you can definitely manage without a cordless screwdriver, you’d be incredibly surprised by the amount of ease and comfort it provides when building flat-pack furniture and other DIY crafts. Even if you don’t intend on using it frequently, having it on hand for the moments you do will make any screwing you have to do significantly smoother, and you’ll be thankful to have picked it up.

If you haven’t owned one before, it’s absolutely worth picking one up, particularly one of the high-quality products listed earlier. If these don’t suit your needs well enough, hopefully, these can give you some guidelines on what an ideal cordless screwdriver looks like.