Smart plugs allow you to control the connected devices such as your smart Tv from anywhere via an App.

Precisely, the smart plug will grant you an on/off control of the devices you’ve connected to it.

That means you could turn your Tv off on your way to work if you forgot to switch it off. Initially, smart plugs only supported one device. But they do power more devices today.

And that’s true if you’ve invested in a smart strip. Of course, smart plugs have their place in any home.

But you want to invest in a smart strip to power multiple devices from a single socket while ensuring you have control over the connected devices.

But smart plugs connect to Wi-Fi to allow you to control your home devices from anywhere. That means you have to pay attention to the Wi-Fi frequency band a smart plug supports.

Usually, dual band smart plugs connect to both Wi-Fi 2.4 GHz and 5GHz. But you want to ensure your chosen smart plug also supports 5GHz. And you might wonder if such smart plugs are on the market.

Yes, you can be sure to find some smart plugs, such as the Broadlink SP4D-US and Innr Zigbee, that support 5GHz Wi-Fi networks.

Since a 5GHz Wi-Fi connection boasts a broader bandwidth of up to 1,300 Mbps, the connected Wi Fi smart plugs will execute your commands faster and more efficiently.

As such, you want to consider adding smart plugs that support 5GHz wireless networks. If you’re looking for such smart plugs, be sure to read on for more information.

Your Wi-Fi home router usually transmits the internet to your smart plug and other connected devices through radio frequencies.

Usually, the router transmits Wi-Fi in two bandwidth frequencies: 2.4GHz and 5GHz. These two frequencies have their ups and downs, and that’s what we want to discuss in this section.

You want to opt for a dual band smart plug since it also supports Wi-Fi 5 GHz frequency. And that means your smart plug will always connect to the internet to grant you remote control over it.

But Wi-Fi 2.4 GHz has an increased wavelength, thus boasting long-range connectivity. Besides, it penetrates the walls better, making it reach your devices that could be far from the router.

So, it is an important frequency if your wall outlet with a smart plug is further from the home router.

And this results in connectivity interference. On the other hand, you have a 5GHz Wi-Fi frequency. It boasts an increased bandwidth resulting in a data transfer rate of 1,300Mbps.

Since many smart home devices don’t support it, the few devices that do support it will experience no connection interference. And that means a more stable connection to the internet.

But the frequency doesn’t penetrate the walls as excellently as the 2.4GHz frequency. As such, you want to ensure your smart plug is in the same room as the router.

So, you want to pick a smart plug that supports 5GHz for more stable Wi-Fi connectivity at an increased bandwidth. And this ensures you can always reliably control your smart plug remotely.

Where You Want to Place 5ghz Smart Plugs

Since Wi-Fi signals transmitted at 5GHz frequency have poor penetration, you want to ensure your smart plug is in the same room as the transmitting router.

But a dual band smart plug that supports 2.4GHz and 5GHz will work just fine, even if it’s in the next room.

And that’s because the 2.4GHz frequency has a better penetration to reach smart plugs in adjacent rooms.

The signal strength of the 5GHz Wi-Fi network drops with an increasing number of walls between the transmitting router and the smart plug.

Therefore, you will keep your smart plugs that support 5GHz in the same room as the router. This ensures a stable internet connection for efficient remote control of the smart plugs.

What Other Communication Protocols Do 5ghz WiFi-Supported Smart Plugs Use?

That means you will pair it with a virtual assistant such as Amazon Alexa Alexa Google Assistant.

Some voice control devices with voice assistants include Amazon Echo and Sonos One, among other smart speakers.

You might even want to connect your smart plug to a smart hub to control it remotely alongside other smart home devices such as a smart light and a smart switch from a single mobile App.

Pairing a smart plug with Amazon Echo allows you to switch it on/off through voice commands. So, you want to pair a smart speaker with a smart plug for hands-free control.

But your smart plug has to communicate with the connected voice control device or smart hub wirelessly.

This wireless protocol is by a company named Zensys. It uses 0.9GHz frequency to transmit the signals between the two connecting devices.

You will require a smart hub to control multiple smart home devices connected to this network.

So, this means that the network can only move through 4 connected devices before reaching the central hub.

And the result of this is reduced latency. What’s more, Z-Wave consumes less electrical power, and you can power it from batteries.

Also, it covers a radius of up to 100 meters and has excellent wall penetration. Moreover, some smart speakers such as Milo Smart Home Speaker support this wireless protocol.

As such, you can use it to control your smart plug by voice. Besides, it doubles as a smart hub!

You can be sure to find smart plugs that also use Z-Wave besides using Wi-Fi 5GHz to connect wirelessly to other smart home devices.

Therefore, they allow you to pair them with smart speakers supporting Z-Wave for hands-free control.

While Z-Wave is a closed network, this one is an open network. Although it transmits its signals at a 2.4GHz frequency, it can also do so at 900 MHz and 868 MHz frequencies.

Unlike Z-Wave, which supports a maximum of 4 hops, this wireless network doesn’t limit you on the number of devices you can connect to it.

And that means connecting as many smart plugs on this network as you wish.

Generally, this network transmits signals faster than Z-Wave. And with its mesh network, you can connect many smart home devices to your smart hub through this network.

That means you could control more smart plugs over this network than you would with Z-Wave.

Many smart home devices such as Amazon Echo and Echo Studio support Zigbee.

If you pair such smart speakers with smart plugs such as an Amazon smart plug, you will be sure to control your smart plug through voice commands.

Bluetooth is a short-range wireless connection between smart home devices. That means you want to keep your smart plug within the connectivity range if you’ve paired it with a smart speaker or a control hub.

But Bluetooth has a short-range, just as we’ve already mentioned, and this is one of its downsides. But it offers an alternative wireless protocol for connecting a smart plug with a smart speaker or smart hub.

As such, you can pair your smart plug with compatible smart home devices. For example, your smart plug could connect with an Amazon Echo smart speaker over Zigbee wireless network.

As a result, you will control the smart plug and switch it on/off through voice commands.

You want to choose a smart plug that supports a 5GHz wi-Fi network if uninterrupted internet connectivity is what you want. And this means efficient remote control via a mobile App.

Of course, a dual band smart plug will serve you better since it supports a 5GHz Wi-Fi network.

But consider a smart plug featuring other wireless protocols such as Zigbee, Z-Wave, and Bluetooth for a more efficient control using a smart home hub. 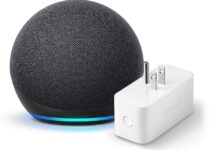