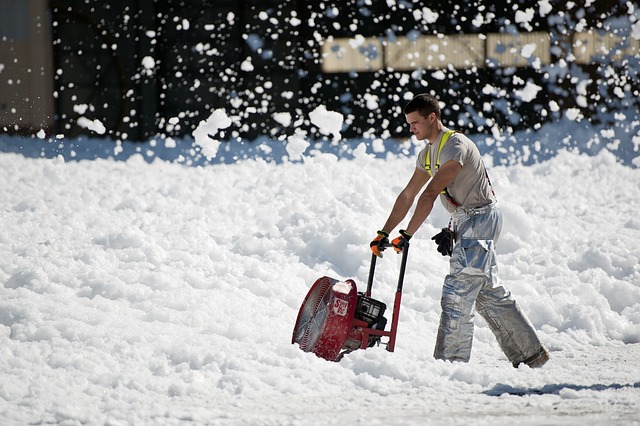 If you live in a snowy climate, winter means the arrival of snow shoveling season. Shoveling your driveway can be grueling work in heavy snow, but there’s definitely a better way. Snow blowers make clearing snow quick, easy and even a little fun. But for the uninitiated, shopping for a snow blower can seem intimidating. How do you choose from all the snow blowers on the market? Here we’ve rounded up the top 10 best snow blowers for 2020 to make your life easier.

It’s important to buy the best snow blower you can afford so you can clear snow as quickly as possible. With hundreds of models on the market, some find it easiest to simply buy one with a brand name they recognize. Or they simply buy the model that their local home improvement store has on sale. A better solution is to buckle down and do extensive research on features and options before buying.

But the best solution is to rely on the research we’ve done for you — saving you an immense amount of time and hassle! Here’s our comprehensive guide to buying a snowblower, along with our compilation of the best snow blowers out there.

There are hundreds of snow blowers to choose from these days. For that reason, we’ll be focusing primarily on electric and rechargeable snowblowers in these reviews. We’ll also throw in value choices for one-stage and two-stage units. One important note before we begin: Since you’ll be likely to use an extension cord for these machines, be sure that the extension is rated for the amperage of the snowblower. You’ll be safer using a cord that’s rated a little higher than that of the motor, especially if you’re using a long extension.

The Snow Joe SJ625E has a 15-amp motor and a 21-inch steel auger, making it one of the largest and most powerful electric machines available. There are a few snowblower manufacturers whose names automatically mean “quality,” and one of them is Snow Joe.  The company claims this thrower can move 800 pounds of snow per minute at a depth of 12″; we have no way of measuring that, of course, but you’ll be able to do much more than just steps and walks with this model. It can easily compete with most one-stage gas blowers, although you may find that if you get too ambitious with deep coverings, you may experience some clogs in the chute. By the way, that chute is adjustable over a 180-degree range. Being in the low price range, this machine is a keeper.

The specs on this Greeenworks 2600502 blower are similar to the Snow Joe SJ625E’s, with a 13-amp motor and a nominal 20-inch auger (as well as a rotatable chute), but you’ll find there’s less oomph in its performance. One obvious reason is that the auger is really 18″ and it’s just enclosed in a 20-inch housing, and the other is that the 2600502’s motor is 13 instead of 15 amps. Quite honestly, though, we’d expect more from a SnowJoe than a GreenWorks. This is still a good thrower for up to about four-inch snowfalls, though, and it’s cheaper than the SJ625.

It’s not just the name Snow Joe that automatically gives you a level of comfort with a snow blower – Toro 38361 does, too. The company’s smaller units are some of the finest you’ll find anywhere and the Toro 38361 upholds the tradition, providing outstanding performance from its 7.5 amp motor on small jobs and lighter coverings that’s four inches deep. The plastic auger only clears a swath of about 12″, and the chute expels directly in front of the thrower, but it’s very easy to maneuver since the unit weighs just 13 pounds. “Power shovel” is the perfect name for this Toro and what it can do.

Here’s one of the two exceptions to our rule: a two-stage machine, which we include not because of the manufacturer’s name, but because of its value for a real workhorse. The Power Smart DB7279 Smart features a 208cc gas engine with four forward and two reverse speeds, electric start, and a 24-inch steel auger. The intake height is 21″, so you can easily use this blower on heavy and 18-inch snowfalls. You’d pay a whole lot more for a comparable Toro or Snow Joe. One important fact: this thrower does not meet California emission standards.

Small snow clearing jobs usually don’t take longer than 45 minutes, and this Snow Joe iON18SB snow blower is the machine for those jobs if you don’t want to be tethered to AC power. Utilizing a 40-volt lithion-ion battery, the steel auger clears 18-inch swaths with ease, in depths up to six inches or perhaps even more (Snow Joe claims it’s eight inches). It also has a rubber scraper bar at the base of the machine to protect decks or other wooden structures. It’s quiet, convenient, and could even give some lower-level one-stage gas machines a run for their money at a much lower price.

The Snow Joe SJ620 is basically a lower-level version of the SJ625E we’ve already reviewed. It clears 18″ of snow at a time instead of 21″, and isn’t quite as powerful (13 vs. 15 amp motor), but its steel auger and rotatable chute provide the same functions, user experience and results on slightly lesser snowfalls – six inches shouldn’t be an issue. If you want electric and don’t need “all” of the 625E, the 621 is worth a long look.

The Toro Power Clear Gas Snow Blower is one of Toro’s best selling lines, and it’s easy to understand why. It’s durable and powerful (for an electric blower) yet lightweight at just 25 pounds. “Power Curve” refers to the curved rotor and funnel housing, which can move more snow with fewer clogs. Don’t expect miracles, though, because its auger only clears an 18 inch path and it isn’t built to handle tightly packed snow or depths of more than about ten inches. The chute can rotate 160 degrees and there’s an ergonomic, adjustable handle to make life easier.

Your mission is to find a good electric snowblower that’s easy on the pocket? Here it is. This lightweight GreenWorks 26022 model has a 10 amp motor and a 16-inch auger, and can remove lighter coverings that’s four inches deep (the company claims six inches) without breaking much of a sweat. To be sure, it’s not the equal of a gas-powered one-stage unit, or even the Snow Joe models we’ve reviewed. But it’s going to clean your walk quietly, easily and at a very friendly price.

This Snow Joe SJ622E is nearly identical to the Snow Joe SJ625E we discussed earlier. The only real differences are a smaller auger, four pounds less weight, and the price. It’s a solid machine and will do the job, but we’d choose the SJ625E unless we had to clear steps or paths that are only 18″ wide, rather than the 21″ the bigger unit can handle.

Here’s our one-stage gas-powered value choice, the Husqvarna ST224P Gas Snow Blower machine. It’s powered by a 208cc engine, has a 24-inch clearing path, a rotating chute, and will charge through snow up to six inches deep. It’s definitely not the machine we’d select if we lived in the snow belt, as Husqvarna makes much bigger, and frankly, better blowers than this one. But the company has a well-deserved reputation for the quality of its snowblowers and heavy equipment, and it’s unusual to be able to pick up “anything” made by the company at a price like this. One thing we didn’t like: they charge extra if you want a blower with a headlight. Most machines come standard with them.

One of the most important decisions when shopping for a snow blower is: electric or gas? Here we explain the advantages of both.

Advantages and Disadvantages of Electric vs Gas

(There’s also a door #3 with a cordless snowblower, needing frequent recharging and usually only suitable for small jobs. Most people don’t pick door #3, but we’ll include one of these cordless models in our list.)

A single-stage has a plastic or metal blade assembly (known as the auger) that picks up the snow and expels it through a chute. These snow throwers only work on hard surfaces like pavement because the auger makes direct contact with the surface; they have a hard time with surfaces like gravel, and can damage decks, lawns and wood structures. These machines are good in depths up to 6-8 inches, while some powerful ones may be able to clear snow as much as a foot deep. They perform better on level surfaces and with fluffy or light snow, and can have difficulty working in wet, heavy stuff.

A two-stage has a more powerful engine and what’s known as an impeller added to the mix. The auger picks up the snow and the impeller is responsible for throwing it; this means the machine can be used to remove heavier, wetter stuff at much higher depths (some models can even handle two feet of the white stuff), and throw it much further. The auger on a two-stage unit never touches the ground, and its height can be adjusted to clear any surface easily. These snow throwers are usually wider than single-stage blowers, so they can cover large areas of ground more quickly. Two-stage snowblowers are also more likely to have extra features. These can include electric start, heated hand grips, power steering, remote adjustments for the snow chute, and variable-speed transmissions.

Choosing the Right Type for You 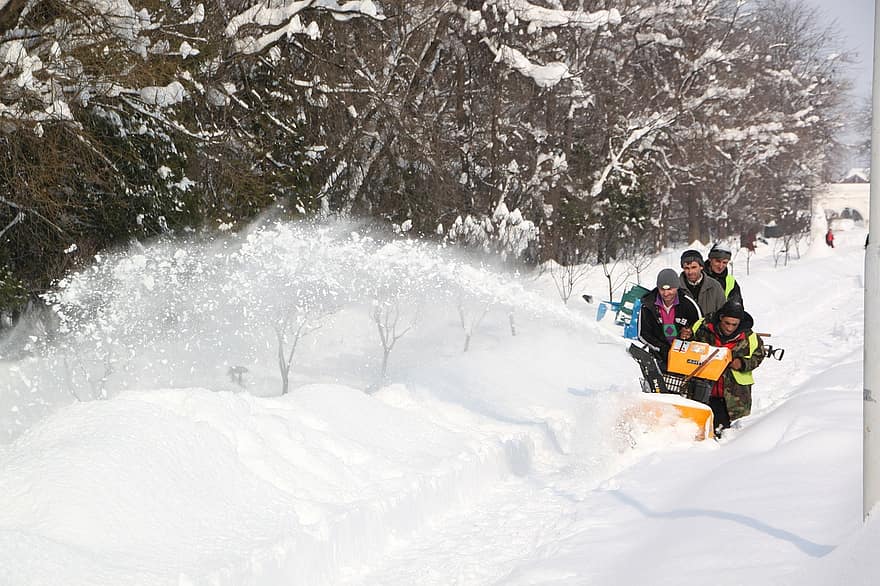 What Are Snow Blower Stages?

Things to consider when buying a snow blower

Here are some of the other factors to consider when shopping for the best snow blowers. We briefly mentioned the difference in width between one- and two-stage machines, but there’s no standard auger width for either. Consider the areas you’ll be clearing and look for a model which can take care of as much space as possible with a single pass. Keep in mind that two-stage blowers will normally have a much wider auger. If you regularly get heavy snows, you’ll greatly appreciate having a self-propelled blower and power steering. And if there’s one “must-have” feature, it’s electric start; think of how frustrating a pull cord is on a recalcitrant lawnmower in nice weather, and then picture having the same problem in the middle of a snowstorm in freezing temperatures.

If you’ve ever tried to find an air conditioner in the middle of a heatwave, you know there’s no sense waiting until winter to buy a snow blower. The time is now to take an honest look at the type of snow you get and the areas you need to clear. Then, armed with this information, you’ll be ready to buy the snow blower that fits your situation.

Ready to Buy a Snow Blower?

Now that you’ve browsed our selection of the best snow blowers on the market, learn the perfect time to buy a snow blower. While snow blowers are easy to use, there’s still plenty to learn before buying one. For example, find out if snow blowers work on gravel or if snow blowers can break ice. And before you start clearing your driveway for the first time, get familiar with our snow blower safety tips.