A power tool like a drill press, rotary hammer, and drill driver is one of the most complicated things you can use in DIY work, with more intensity and complex features than nearly any other crafting device. Here are the types of drills & their uses – know what drill to use when.

They can be just as common for small-scale repairs and custom projects as they are for constructing houses and furniture from scratch, and this couldn’t be truer in the case of the power drill.

If you’ve yet to purchase your own power drill, you’ve likely seen there are an alarming number of different types out there. If you’ve already owned a drilling machine, you may simply not know how many options there are.

Making great crafts means knowing to use the right tool, and it can be extremely hard to know exactly which power drill, among the many types of drills, is good for a given craft or project.

Each drill type we’ll list here should give you an idea of just how many kinds of power drills you can go with for your DIY needs, as each power drill has its own strengths and limitations that are worth investing in for different projects.

Before getting into the different types of drill exteriors and styles, there’s a special differentiation that needs to be made regarding the motor inside a given drill. Most often, you’ll see drills stated as being brushless, which means it has a more modern motor that relies on magnetic parts. This is the reverse of a so-called brushed drill, which generates heat using the friction of a carbon brush against moving metal parts.

There’s a lot to be said for the differences between these two drill motor types, but for the most part, you’re going to prefer a brushless drill for any sort of DIY projects. A brushed drill is generally more powerful, and it’s great for frequent heavy-duty work. However, this type of electric drill tends to be louder and can also degrade over time, making it less worthwhile for most DIYers to purchase. Much like the brushed and brushless drill comparison, a corded drill has more to do with its power source instead of its function. It usually runs off of a plug that jacks into a wall outlet, and this usually means it runs much faster and stronger due to its lack of an internal battery. A corded drill also tends to be less expensive, with a solid hammer drill like the Black + Decker 3/8 Inch Corded Drill sitting at an impressively low $35.

This missing battery also means a corded drill is much lighter, which can help a lot if you happen to be spending most of your time in a workshop instead of your backyard or living room. These tools aren’t often useful if you don’t have a stable work space, but they can be great tools if you want something a little more powerful.

When To Use a Corded Drill

You’ll usually want a corded drill for projects that require huge amounts of additional screwing or drilling, since you won’t have to worry about its battery life. This can include homemade furniture and even auto repairs, but since their cords aren’t typically too long, avoid using corded drills for building especially larger things like a deck, or undergoing wall repairs.

If you think this means it’ll be significantly weaker than a corded drill, you’re only partially right. It will definitely have less power and torque due to its limited power source, but a cordless drill will rarely have a significant difference in performance unless it drills into unusually heavy or dense materials.

When To Use a Cordless Drill

For the most part, you can use a cordless drill for nearly any project involving wood or similar light materials. It’ll work excellent on big projects like decks that require you to move around and position yourself in odd places, but it’ll also make for an excellent tool when working on smaller boxes and containers that you wish to build indoors and outdoors. 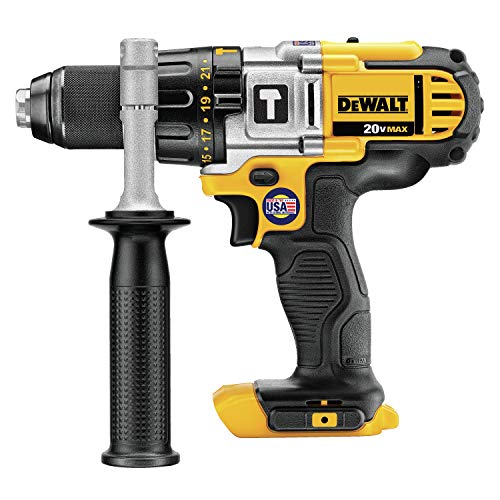 A hammer drill is the first in the realm of unusual drill types, as this has a slightly unique appearance compared to many of the standard types of drills listed above. Products like the DEWALT 20V MAX Hammer Drill, for example, have a grip on the side for your non-dominant hand to hold onto, giving more comfort to withstand a more intense amount of pressure.

This is because the hammer drill doesn’t just drill into things through spinning, it also applies massive pressure through a hammering mode that can go through concrete and other firm surfaces. This strength is entirely optional thanks to a great set of settings, but for the most part, the hammer drill is just a drill with added features and strength for those who need it.

When To Use a Hammer Drill

A hammer drill can still function like a regular cordless drill, and thanks to its strength, it can be excellent for outdoor home repair, including walls, decks, and scaffolding. That said, the hammer drill’s hammer feature makes it a unique tool for those looking to do work on concrete walls, or to attempt drilling holes in similar stone or clay materials for outdoor furniture and decor. 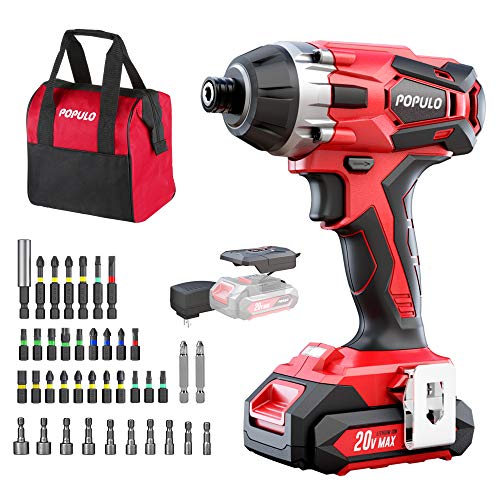 A drill driver and an impact driver are somewhat more subtle of a difference, being less all-purpose and more for providing extreme torque. The drill driver and the impact driver are specifically built for going through wood, having more strength than a more traditional power drill, and a fittingly higher voltage, but also having options to driving screws thanks to their customizable speeds.

The other main difference is how the drill bit is attached, as an impact drill and an impact driver use a clamp that can be quickly exchanged. This often means that an impact driver will have especially large kits that come with them, with products like the Populo 20V Max Lithium Impact Driver Kit having an impressive 39 different heads to choose from.

When To Use an Impact Driver

An impact driver is much better for woodworking than a standard power drill, since it often also can loosen or tighten screws alongside drilling into materials. If you wish to take on larger projects that you want sturdier attachments with, it’s generally better to go for an impact driver than a traditional power drill. 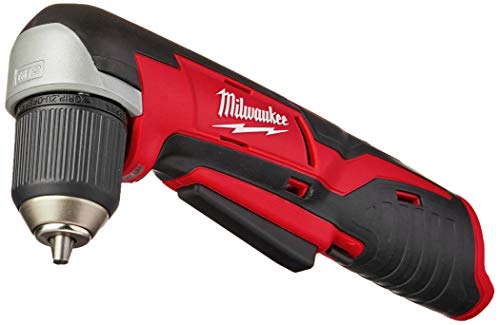 Easily one of the strangest-looking drills, a right angle drill tends to be much more built for drilling holes in especially hard-to-reach areas. This drill is mostly vertical, but with a head that points perpendicular to your grip, meaning you can get behind walls and reach higher without needing to have a thick drill getting in your way.

They tend to not be as powerful and are more suited for smaller holes, but much like impact drivers, they can have a wide number of heads to ensure you drill the perfect size you need. Thanks to their small sizes, with products like the Milwuakee 2415-20 M12 only weighing about 2 lbs and having an impressive 12V strength, meaning it matches the power of many other types of power drills.

When To Use a Right-angle Drill

You’ll want to use a right-angle drill when you’re having lots of trouble getting at specific angles, as it’s best when it comes to making holes inside of cupboards and in special corner areas. You can still certainly use a right-angle drill for any regular drilling, though, so long as you don’t mind slightly smaller holes and something a little more lightweight.

Which Drill Is Best?

At the end of the day, none of the drills listed here are bad options, but there are definitely some that are superior to others in certain tasks. Most DIYers will find that cordless and brushless drills are a must-have, but otherwise, the specific shape can depend entirely on your personal needs. Simply put, any drill is generally worth the money if you find it works for you.