Although smart money says to buy a toaster oven if you want to make toast, they don’t actually make the best toast. You need a toaster for that. They do, however, make better toast than a regular oven, and they’re considerably faster and less expensive to operate. Since toaster ovens are small, they cook food more quickly than a larger oven, even if you’re not using the convection mode. Read on for how to use toaster ovens for baking.

What Are Toaster Ovens?

Often referred to as countertop ovens, toaster ovens started out as a better method for making toast as well as heating individual or small servings of food. In 1910, innovation and boldness inspired scientist William Hadaway to invent the toaster oven, which looked absolutely nothing like the sleek appliances we have today.

Today’s ovens have features and capabilities that rival those of full sized ovens. Plus, if you only have a few people to cook for and a spacious mini-oven, you can even prepare a Thanksgiving dinner in a countertop oven.

To do that, you’ll want to bake your turkey first and your pies if you have room. Then, after removing your turkey, which needs to set for about 20 minutes anyway, put in your casseroles and side dishes to cook while you’re slicing the bird and putting out the cold dishes.

By this time, your casseroles should be done, and if you haven’t already baked your pies, put them in to bake while you eat. With proper timing, everything should be done at about the same time, ensuring that your entire meal comes together the way you’d like.

Depending on the appetites and the number of dishes you have, as well as the size of your mini-oven, you can realistically serve up to four or six people using this method. For large gatherings, however, you’ll want to rely on your larger oven, or you’ll be cooking for a long time.

Countertop ovens are available in a variety of sizes, and your best option is to buy one that’s a little larger than you think you’ll need. Once you start using yours, you’ll use it more often than you probably thought you would. They’re often a better use of your time in the mornings than going through the drive-through, and you’ll eat healthier food if you prepare it yourself.

What Types Of Toaster Ovens Are Available? 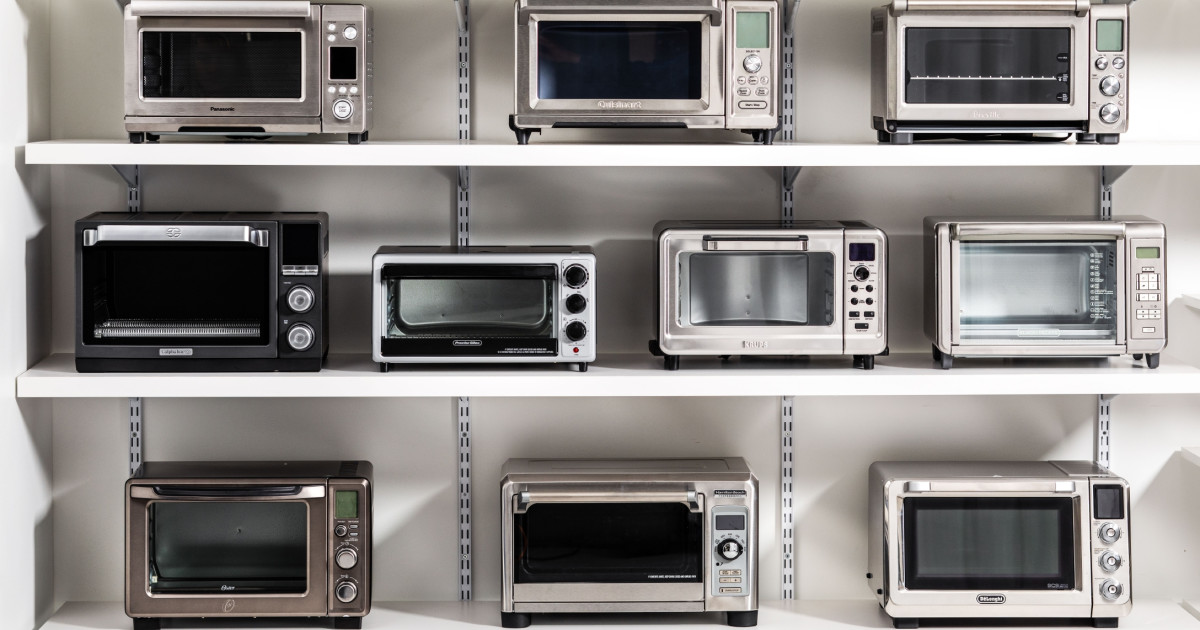 Many of the larger ovens have settings for bake, broil, rotisserie, convection, air fryer, and so forth, so you don’t need a separate oven for each function. This, in addition to their energy efficiency, gives them an edge over full sized ovens for both ease and cost.

Convection ovens are ideal for those who like to oven bake items but don’t want the heat and expense involved in using their large conventional oven. This is especially true for singles or couples who might want to bake only a few cookies at a time or a small cake or pie.

Convection ovens use a fan and exhaust system to circulate hot air over, under, and around the food. This causes the food to cook more quickly, so check it often, starting about halfway through the allotted time so that the food doesn’t overcook. Benefits of convection ovens include:

Why Do Convection Toaster Ovens Have A Regular Oven Bake Setting?

Although many foods are tastier when cooked on the convection setting, there are times when the conventional oven setting is a better choice.

When Should I Use The Convection Setting?

Use the convection setting whenever you’re cooking food that’s tastier when it’s browned and crispy, such as:

If you’re baking large batches of food, cookies, for instance, the convection setting will substantially reduce your total cook time so you can avoid crowding pans to reduce the baking time.

If you’re baking a covered casserole, you can use the convection setting because it will take less time, even if the dish is covered.

When Should I Not Use The Convection Setting?

Although the convection setting yields wonderfully crisp pizza and roasts, for example, sometimes you don’t want a crisp exterior. If you’re baking any of the following, then the regular bake setting is preferable:

When you bake a cake, you should locate the oven’s heating elements beforehand so that you can place the layers accordingly and ensure an evenly baked cake.

If you’re using the regular bake setting, then you probably won’t need to make any adjustments for the time or temperature. Bake for the same time and at the same temperature that you would in a traditional oven.

Some cooks use the convection setting for homemade bread because it yields a crisp crust, while others maintain that it dries out the interior of the bread.

This is a personal choice. There’s no set rule for it. If you have a smaller style oven but want homemade bread, you can make a mini loaf or several, or you can make dinner rolls or smaller round loaves.

Also, some cooks like the convection setting for quick breads because it seals the top, thus sealing the moisture in, but some think the air results in a quick bread with a dry interior. Again, this is a strictly personal choice with no set rule.

What’s The Procedure For Baking Using The Convection Setting?

When you start your baking procedure, and you’re using the convection setting, lower the oven temperature by 25 degrees so that you don’t forget to do that later.

Next, use pans and trays with low sides so that the hot air can circulate freely over the food. Otherwise, you’ll lose one of the main benefits of the convection function.

Remove any excess pans that you may be storing in the oven — yes, we all do that — so that airflow is not impeded, and don’t crowd the oven with too many pans of food. Pans of food bake more evenly when they’re placed in the center of a rack with ample airflow over, around, and under the pan or dish.

You can use multiple racks and place a pan or tray on each rack if your oven is large enough to accommodate them. However, crowding the oven with food will decrease the oven’s effectiveness, especially when using the convection setting. However, this is true whether you’re using the convection function or the traditional oven setting.

Since the convection function decreases the overall time needed for cooking or baking, you’ll need only about half again as much time to bake two pans of food rather than twice as long.

When your food should be about halfway done, then start checking the food periodically so that it doesn’t overcook. Your overall cooking time will be reduced by about one-third, so adjust the cooking time accordingly.

What Type Of Food Can Be Baked In Toaster Ovens?

Any type of food that can be prepared in a large oven can be made in your mini-oven. It’s great for quick and easy weeknight meals such as sausage and peppers.

Line your baking sheet with foil, spray with non-stick coating, spread your sliced peppers and sausages around, and bake for a half-hour or so. This is an ideal use for the convection function, but the conventional bake setting will also work well, as will the air fryer setting.

Frozen foods such as chicken strips or fish fillets can be placed directly on the rack – spray with non-stick coating first – and set to bake while you toss a salad and microwave potatoes, and you’ll have dinner ready in no time.

Spatchcock a whole chicken — which means cutting it in half down the backbone and flattening it –, and you can cook an entire five-pound chicken in a one-shelf oven or use Cornish game hens for some of the smaller ovens. This means you can have healthy, tasty roasted chicken in less time without heating your large oven.

Weekday breakfast is lots easier for those who own one of these mini ovens. Place a few strips of bacon on the rack and place the pan under the rack.

Broil for a few minutes, and you can have bacon and eggs in no time, especially if you put the eggs in a small pan and cook them along with your bacon. Cleanup will be easier if you use non-stick spray on the rack and pan before baking, or cover the pan with aluminum foil first.

If pastries are more your breakfast style, make muffin batter on the weekend and freeze it in individual silicone or aluminum-paper baking cups. Take one out in the morning and bake it in your little oven while your coffee brews, and you can skip the drive-through and save a few minutes. You’ll eat healthier too!

While you’re mixing muffins, mix up some cookies too, freeze them, then take out a few at a time for fresh-baked cookies during the week. There’s no need to defrost either the muffins or the cookies. Just put them in the oven straight from the freezer. Most silicone baking cups can go straight into the oven as long as the temperature isn’t more than 428 degrees. They’re reusable, too, which makes them a great investment.

reduce or eliminate your takeout consumption during the week by cooking extra on the weekend and freezing individual servings of the extras. During the week when you’re rushed, you’ll have a home-cooked meal ready in no time when you pop them into your little workhorse oven. An investment in toaster-oven-size bakeware is well worth the money for the convenience they offer.

Roasting in a convection oven couldn’t be simpler. The hot, dry air that circulates around the roast results in a nicely browned and crisp crust. However, you might want to rub the surface of your roast with oil to prevent the interior from drying out. This is another personal preference item, though. There’s no set rule about it.

Can I Make Toast In It?

Although your mini oven is much more versatile than just as a toast-maker, you can indeed make toast in toaster ovens! For best results, make two slices at a time or as many as will fit comfortably on the rack. As with baking a cake, placing your toast-to-be under the heating elements will provide you with toast that’s evenly browned.

Most toaster ovens have a broil setting, and some have a toast setting. Either one should provide you with nicely browned toast, but you may need to toast each side individually.

Do Toaster Ovens Bake The Same As Microwaves?

What Types Of Pans Should Be Used For Baking In Toaster Ovens?

Toaster ovens function like the oven on your kitchen range and can use glass, metal, including aluminum foil, silicone for temperatures up to 428 degrees, and any product marked as oven safe. You should NOT use styrofoam, plastic, parchment paper, paper towels, or coffee mugs.

Many larger toaster ovens can accommodate full-sized baking pans and dishes. If yours doesn’t, toaster-oven-size pans are available online and in many retailers. These are the same as their full-size counterparts. They’re just specifically sized for smaller toaster ovens.

Most people who own toaster ovens can’t remember how they ever managed without them. They can expedite meal preparation all the way from breakfast to a late-night snack. They’re energy-efficient and fast, and they take up very little counter space. If you don’t have one, then head to the store and get one. Or better yet, get on your smartphone and order one! 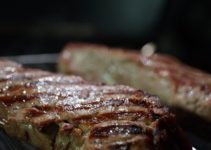 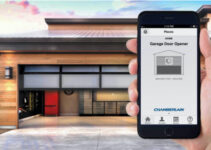 Get Homeowner Tips, Tricks, and Reviews Straight To Your Inbox