Home
Appliances
What Is The Best Toaster Oven With Air Fryer?

Nowadays, finding a superbly versatile kitchen appliance is no longer an anomaly: the industry is clearly on board with Marie-Kondoing our counter space.

If you need a toaster oven with at least eight additional functions, you’re bound to found something – but how many of these products really work? And if you are aiming for the top, what is the best toaster oven with an air fryer mode?

Before you sign the delivery order, check out the selection below. These all offer baking capabilities on par with their full sized peers, plus a few other surprises to boot. 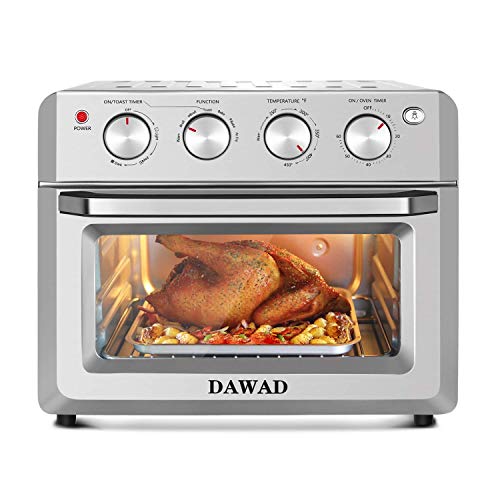 With a total capacity of 19 QT, the DAWAD air fryer toaster oven almost escapes the realm of “small appliances”.

However, it does perform each task with enough reliability to replace its competition, so if you plan things correctly, it will help you keep your kitchen organized.

Our favourite feature of the DAWAD is its simple control panel. It uses four traditional dials that allow you to choose the time, cooking mode, and temperature you want – without endlessly navigating a “minimalistic” LED screen that requires you to press the same arrow ten times.

In addition, this toaster oven comes with a series of practical yet straightforward presets for chicken (yes, it’s large enough to fit the entire rotisserie chicken or a 12-inch pizza), cookies, cake, chicken wings, and air-fried French fries.

Despite its massive size, the DAWAD is not a complete energy sink. This is partly because it uses a dual-fan system that will help everything cook faster. It also heats up quickly when on bake mode, although some reviewers noted that it took too long for toasting bread.

The oven includes all the standard accessories: a crumb tray, baking pan, oven rack and air frying basket. These are all pretty high quality and dishwasher safe, although the baking pan is a bit heavy. 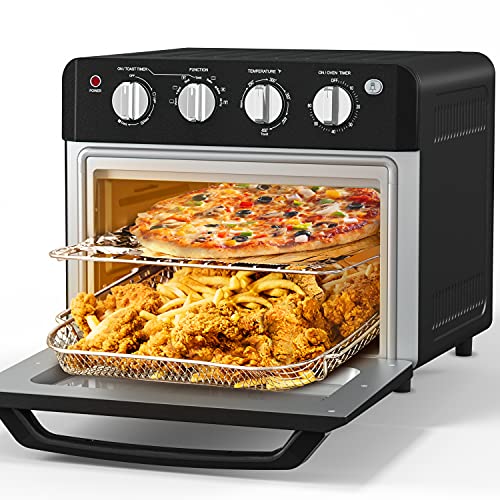 The Beelicious air fryer and toaster oven is a convenient 7-in-1 appliance that allows you to bake various meats, pastries and veggies. In addition to that, it can also replace your deep fryer with an oil-free method that offers the same crisp.

At first glance, the Beelicious looks like a regular, if not slightly bulky, toaster oven. However, it includes a couple of big wins in the design department that are worthy of note.

First, the air frying basket fits just right in the oven’s middle rack. It has the correct depth to ensure all the food will be at the same distance from all surrounding heat sources. It is pretty rare to find as simple as it may sound, but it ensures everything is evenly crispy.

In addition, the crumb tray is light enough to double as an additional wire rack when you are baking toast. If you have a large family, this will allow you to toast up to 6 slices of bread simultaneously. All accessories are dishwasher safe and feel sturdy to the touch.

On the other hand, is the outer case. Beelicious here opted to steer clear from the usual (and may be overused, at this point) polished steel finish. Instead, they opted for matte black metal with silver details.

The result looks like it has personality, but it may not match the rest of your kitchen décor.

On the other hand, the oven door has one major flaw: it automatically pulls back up and has no way to leave it open. This is potentially messy when trying to pull a tray out or flipping the contents inside. 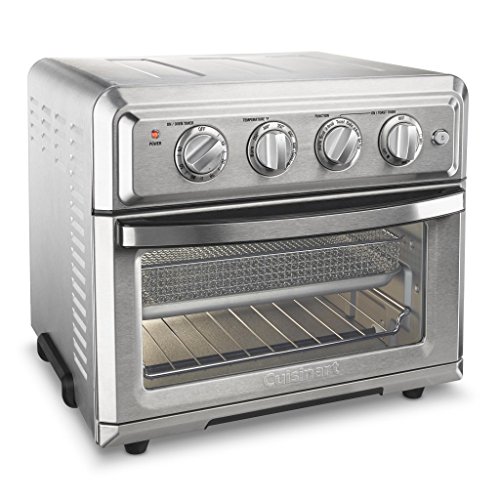 As one of the most established brands in the small appliance market, we usually expect much from Cuisinart. In this case, they did not disappoint.

Although slightly smaller than some of the previous options (with a capacity of only 0.6 cubic feet), it is still large enough to bake or reheat a 12-inch pizza or over a dozen chicken wings.

This is mainly due to some intelligent development choices that made the internal mechanisms as much as possible. These maximize the inside space while still making the overall oven smaller.

This mode advertises itself as having seven different cooking settings. In addition to toasting, baking, and air frying, it also has a convection fan, a broiler, and a food warming option.

The convection baking mode is interesting for those interested in reducing their electricity consumption, as convection ovens can help keep cooking times short by moving hot air faster.

The outer polished steel casing will match with most other trendy kitchen appliances. In addition, the steel layer is thick enough to resist a few scratches. Occasionally, it does make it feel warm on the outside.

The control panel looks stylish and functional. It includes an additional knob meant to control the toaster function only. This provides a lot of “room” between each degree of toast darkness and allows you to customize the settings with more precision.

The accessory set is unfortunately basic: just the oven rack, baking sheet and frying basket. They did not include a separate crumb tray (although technically, the baking pan can double as one). 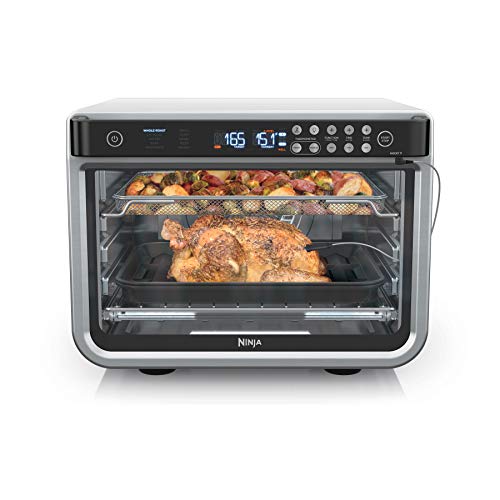 Ninja jumped to fame thanks to their highly-coveted air fryer, and they still strive to replicate that success by privileging automation and digital controls.

The 10-in-1 Foodi Smart XL includes a lot of extra features that feel techier than its competitors. The two most notable is the Smart Thermometer system, which will allow you to safely cook meats without taking out the food and losing heat in the process.

As this device is large enough to fit a small turkey, this thermometer feature can be a lifesaver. However, the lack of a rotisserie spit does take away a bit from its potential.

The second main innovation is the fully digital control panel. This allows you to set temperature and cook times to the minute or the degree.

In addition, a set of internal pilot lights is linked to the control panel, and it will always “highlight” the right rack in which to place your tray or air frying basket for each cooking mode.

Combine this with four separate tray racks, and you will get a lot of customization open. However, the button panel is a bit difficult to get around, especially for first-time users. 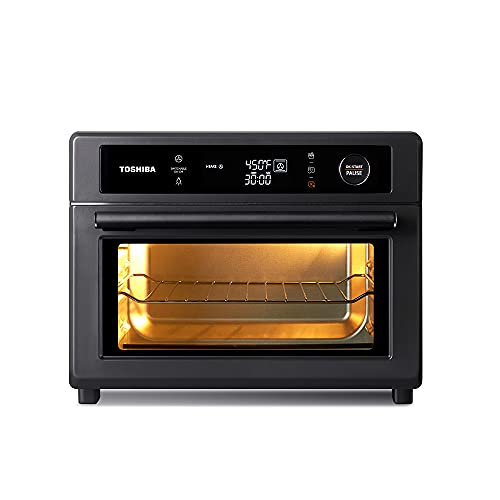 Small but mighty, the Toshiba Air Fryer Toaster Oven combines a convection oven, a broiler, a bagel maker, a slow cooker and a food dehydrator.

For the most part, these different features work efficiently and consistently – although the difference between the regular toaster function and “bagel toasting” may be more of a marketing gimmick.

Still, there is a lot in this model that is worth the money. First, it contains six separate heating elements, where most models only have four. This means that this oven can reach high temperatures faster, especially when in baking mode.

Plus, the design is also pretty attractive. The case is made of polished titanium, which looks dark and elegant – and it’s less likely to end up with fingerprint marks.

The regular button and knob pad were replaced with a smart touch screen, similar to the one used by the Instant Omni. It allows you to slide your finger instead of twisting individual knobs.

On the other hand, the oven itself is small and may not fit a whole chicken or more than five pieces of toast.

Cuisinart is an American manufacturer that specializes in small kitchen appliances. Their original claim to fame was the miniature food processor back in the 1970s. Now they also produce blenders, Sous vide machines, oven toasters, and juice extractors.

Ninja started in Montreal but has now moved its HQ to Massachusetts. They were among the first to popularize the air fryer. They offer a wide range of digital and smart-home-enabled home products.

Australian manufacturer Breville specializes in all types of small kitchen appliances. They currently hold the license for official Nespresso machines. In addition, their Breville Smart Oven Air fryer is one of the company’s most successful products.

Japanese electronics giant Toshiba is the seventh-largest company in its niche. Although primarily associated with computers and sound systems, Toshiba has also expanded into home appliances and smartphone parts.

What Can You Do With a Toaster Oven?

A few decades ago, having an oven in every kitchen was a given: most gas stoves included a gas-powered oven right below them.

However, as fuel prices went up, the cost (and the carbon emissions) attached to using your cooking gas for up to an hour each time. Further, as dishwashers became more popular, they occupied the “slot” previously reserved for full sized ovens.

And where else can you place such a bulky appliance? Toaster ovens initially came about as a way to solve this problem. But let’s be honest: often, their most vital selling point is that they keep you from going into debt by buying six different appliances.

In this sense, buying a “6 in 1” or “10 in 1” air fryer toaster oven is often an investment. They may be slightly pricier than purchasing a basic model, but are cheaper than a toaster, a convection oven, a separate air fryer, and a rotisserie spit separately.

Still, even a relatively basic toaster oven will allow you to make:

This is a pretty wide assortment of food, without the need of devoting an additional section of your kitchen to the oven or buying an extra set of pots and two small appliances.

Ovens may be self-explanatory for most people, but air fryers are relatively new. So what’s behind the “21st Century microwave”?

What is air frying?

Air frying uses the same concept as convection baking but in a much more powerful way. It uses very hot air, which rushes around the food. This movement adds a bit of kinetic energy to complement the thermal energy of the heat, cooking food faster.

An air fryer oven often creates a crispy crust around your foods by reaching much faster temperatures in less time. This is very similar to the one you would get from deep frying foods.

The main difference? Where fried chicken or fries get their crunch by embedding oil into the starch, an air fryer is just causing the outside sugars or starches to “pop” – just like popcorn would. It feels the same, it tastes very similar, but it has much fewer calories.

What can you do with an air fryer?

At high temperatures, pretty much anything deep-fried or pan-fried can be placed on the air fryer instead. This includes:

Is air frying better than frying?

If you are making anything starchy or breaded, air frying will yield 20 to 60% fewer calories than deep frying. That by itself is a significant saving!

On the other hand, meat-based dishes often get most of their calories from the meat itself. Because of this, the final calorie content may be similar to pan-frying or grilling them.

How to adapt recipes to an air fryer?

Most pre-packaged frozen foods now come with air fryer instructions, which are easy to follow.

Meats can be simply placed inside after being marinated in your seasoning of choice. Cooking times will depend on the thickness of the cut but will often be around:

What is the best toaster oven with an air fryer? Who knows! We have reviewed some of the best. Make sure you measure your counter space carefully and ensure you get the functions you will genuinely need. 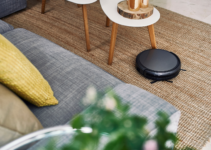 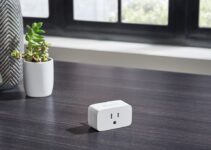